With over 2,500 students and $122 million in capital raised, Lambda School is one of Silicon Valley's hottest startups. To achieve this feat in under three years, Lambda leveraged an emerging tactic amongst startups: using no-code software. Specifically, the spreadsheet software Airtable and workflow automation software Zapier, were at the core of Lambda's early technology stack.

No-code tools like Airtable helped Lambda move fast at the start. However, once the student body grew to the thousands, they became more of a hindrance. I joined Lambda School to help migrate them from their no-code stack to more scalable technologies that could serve tens of thousands of students and beyond.

The first project I led was building a tool to view any student's complete record.

Imagine clicking through a spreadsheet and it repeated freezing for up to a minute at a time. Now imagine happening to you dozens of times per day.

When I joined Lambda School, this was a daily frustration for employees. Most of the school’s information lived on one massive Airtable spreadsheet, containing hundreds of thousands of rows of data across 50+ tables.

The Student Operations team was one of the most frequent users of this spreadsheet. They looked up student records daily. Since the spreadsheet was so overloaded, and most of the student data existed across many tables, looking up one record took "between 5-15 minutes".

First, the engineering team had to build software to keep Airtable synced with a Postgres database. With the database ready, my job was to lead development on the custom tool sitting on top of it.

I started by gathering requirements from each team on the datapoints they needed. Then I constructed the tool’s interface using Retool, a rapid internal tool builder. Once built, I collaborated with other engineers to write SQL queries, install advanced security features, and speed up search functionality.

After orchestrating a handful of feedback cycles with end users to iterate on the tool, I recorded a video demo, wrote launch messaging, and announced the tool to the company as the Student Master Viewer ("SMV").

Across a company of over 170 people at the time, SMV saved Lambda 133 hours per week of manual productivity. It continues to be used over 100 times per day, as of April 2020.

Here were the Slack comments responding to the launch messaging: 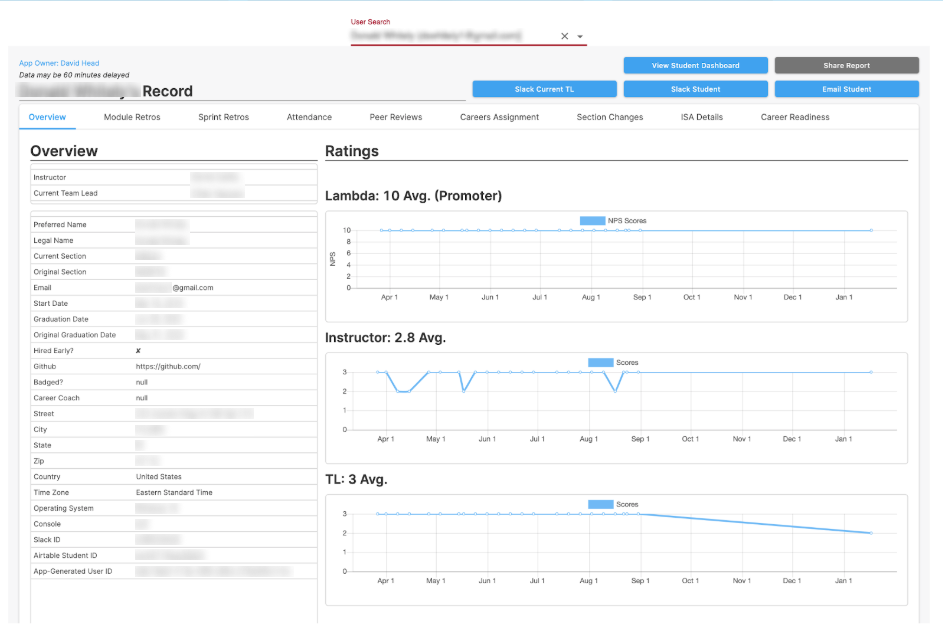